Athens is a vast, modern city brimming with antiquities. What do you do if you only have a day to spend? Here we’ve curated the best options that combine the popular highlights with a slice of local life.

Planning Your Day In Athens

Spanning 160 square miles, Athens—the birthplace of democracy and western civilization—is a congested metropolis of three million people. This city could take years to get to know fully. Luckily, many of the most popular museums, ancient temples, and colourful markets are concentrated in the city’s core and can easily be visited on a walking tour. Base yourself close to the Acropolis, in the Kolonaki, Koukaki, Monastiraki or Plaka neighbourhoods, where you can walk to all the sites.

Since food lies at the heart of Greek culture, you may want to allow more time for savoring the local cuisine. All the areas you’ll pass through on this suggested itinerary are chock-full of great bars, cafés, and tavernas (and we’ve included a recommended lunch stop). And Greeks still like to take their siesta; hence, many businesses close for two hours mid-afternoon.

Of course, you don’t have to follow this itinerary rigidly. Use it as a guideline. Be flexible and let serendipity be your guide on your Athens adventure. Tourism is Athens' life-blood, and you'll find the locals extremely welcoming.

Kickoff With Coffee And History

The perfect day in Greece begins with a strong cup of coffee and a hearty breakfast. There’s no shortage of excellent cafés and cozy breakfast spots in Athens, but since you’ll begin your sightseeing near Monastiraki, there’s no better spot than Duo Goulies & Duo Mpoukies (Dragatsaniou 8), on the northeast side of Monastiraki. Try a superb muesli with dried fruits, or Greek yogurt with chia seeds. 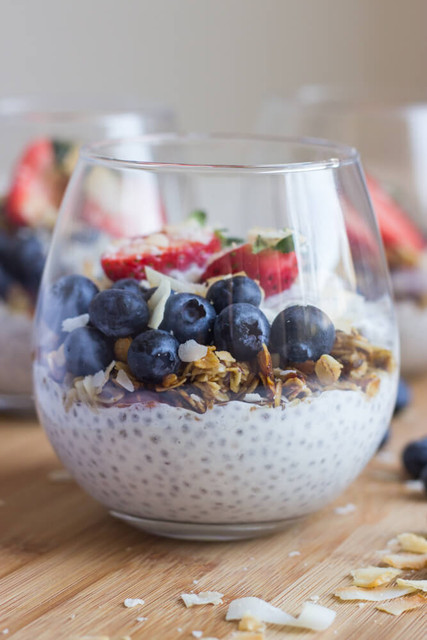 Now begin your sightseeing at the spectacular National Archaeological Museum, a treasure trove of Greece’s ancient history. Try to arrive when the doors open at 8 am and allow two hours to see the highlights. Must-see exhibits include the gold death mask of King Agamemnon, dating back to 1600 BCE and the bronze figure of Zeus hurling a lightning bolt. It’s worth splurging for a guided tour. 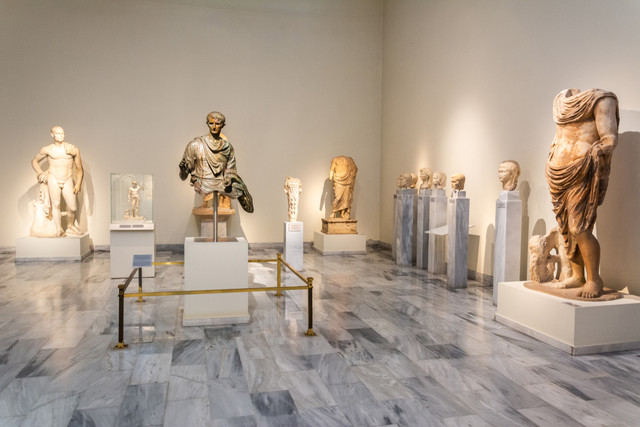 The museum is a 10-minute walk from the Omonia metro station, where you can catch a train to the Syntagma station. From there it's one stop to the Greek Parliament (watch out for pickpockets on the metro). Alternately, you can walk from the museum via Omonia down Panepistimiou to parliament, a 30-minute walk. 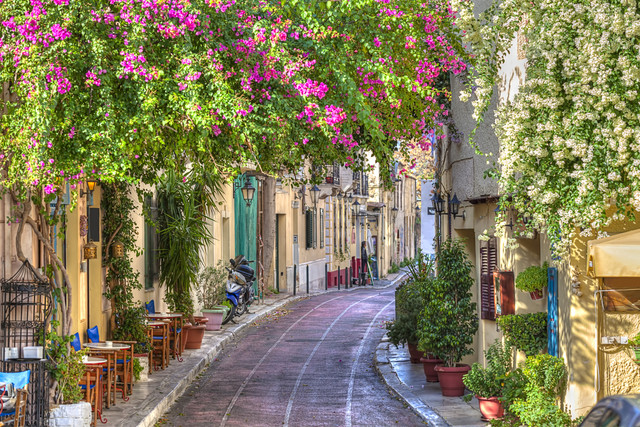 Changing Of The Guard And Temple Of Olympian Zeus

Constructed in 1836-42 as the Royal Palace, the Greek Parliament is an imposing and austere neoclassical building overlooking Syntagma Square. It wins no beauty prizes, but you’ve come for one thing only: to witness the 11 am Changing of the Guard. That's when the costumed evzones (guards) of the Tomb of the Unknown Soldier change position. 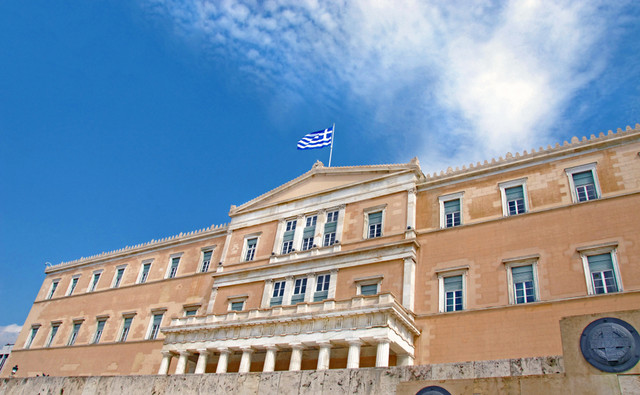 If possible visit on Sunday, when the entire corps parades down Vasilissis Sofias, accompanied by a band. If you miss the parade on this timeline, not to worry—the ritual occurs at the top of every hour, 24/7. If possible, arrive no later than 10:45 am to gain a good vantage before the crowds gather.

Next walk south down Vasilissis Amalias some 600 yards and cross Vasilissis Olgas for Hadrian’s Gate. It was built during the Roman period, around 132 CE, and takes the form of a triumphal arch at the entrance to the Temple of Olympian Zeus. Now turn right into the temple complex.

Initiated in the 6th century BCE, the Temple of Olympian Zeus was completed at the same time as the arch. Supported by 104 massive Corinthian columns—of which only 15 remain standing—it was the largest temple in Greece. It was vandalized during the Herulian sack of Athens in 267 CE and in ensuing centuries much of the stone was repurposed as building materials. On one corner, 13 columns form a single unit, which will give you a sense of the mammoth scale of this once-monumental temple. 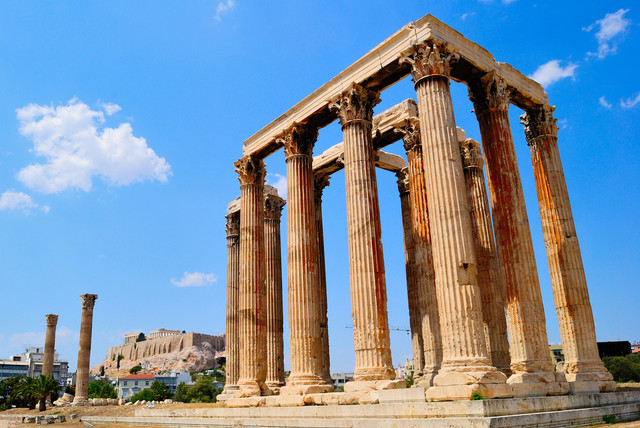 Lunch And Exploration In Plaka

It should now be around noon. Cross Vasilissis Amalias and walk west on Lisikratous; turn right at the end of Lisikratous and follow Tripodon through the heart of the Plaka district. Laid out beneath the Acropolis, Plaka is the oldest and most atmospheric of Athens’ districts and an enclave oozing Greco-Ottoman charms. Its cobbled alleys are lined with market stalls emitting aromas of garlic, olives, and citrus, while the cafés brim with fresh-brewed espresso. For lunch head to Scholarhio, a traditional restaurant with patio dining—they'll deliver a platter of 20 typical Greek dishes and you can sample as many as you like.

No time to linger. Following lunch, spend an hour exploring this area as you make your way westward to the Ancient Agora. The streets are a maze, so heed these directions: Follow Tripodon north as it curls right (at which point it's called Flessa); after one block, turn left onto Adrianou and proceed 400 yards to Hadrian’s Library (it was gifted by Roman Emperor Hadrian in CE 132), on your right. Follow the sunken ruins to the entrance, on the west side. Turn left as Adrianou (now pedestrian-only) continues 250 yards to the Agora entrance.

It’s impossible to overstate the importance of the Ancient Agora. It's literally the birthplace of democracy and ancient Greece’s administrative and political hub. Arriving around 2 pm, you’ll have two hours to explore this expansive site. This includes one hour in the Stoa of Attalos, a second-century BCE building restored to its original state in the 1950s.

Today it's a museum. You're standing on hallowed ground. Here was the world’s first-ever elected parliament, and trial by democratically elected juries (exhibits include hemlock cups used by those convicted to death, like Socrates). It’s a huge site, so be selective with your time. Don’t miss the Hadrian Statue and, immediately west, the well-preserved hilltop Temple of Hephaestos.

Now exit the Agora by the southeast gate and follow the path that leads south some 250 yards to the Acropolis perimeter path and main entrance. You’re not yet ready to visit the Acropolis, however. Instead, walk past the entrance gate to Dionysiou Areopagitou, the cobbled pedestrian boulevard that runs along the southern base of the Acropolis to the New Acropolis Museum.

The world-class New Acropolis Museum provides the perfect intro to what you’ll see at the Acropolis itself. Housed in a state-of-the-art building—constructed to the dimensions of the Parthenon—it displays a jaw-dropping trove of friezes, sculptures, and marble statues arranged as if they were still in their original home. The highlight is the five caryatids (female sculptures), moved from the Erechtheion temple to save them from further damage.

Take your time to admire the freestanding statues on the second floor, reached by a glass ramp, And on the third floor, don't miss the marble Parthenon Frieze, a stunning 420-foot-long bas-relief tableau that once adorned the Parthenon. Begin with a video (in English) that spans the history, treasures, and context of the Acropolis. If you visit on the weekend, check out the Virtual Reality Gallery, with 3D video screenings.

Allow about 90 minutes to tour the museum, ending around 6 pm. Catch your breath with a cappuccino or espresso at the museum’s café before crossing the street to the Acropolis’ southern entrance gate.

Sunset at the Acropolis

No argument—the Acropolis is the most awe-inspiring of Western Civilization’s ancient sites. It's best seen in the early evening when the crowds have thinned, the heat has diminished, and you can savor the site in relative peace. The southern entrance opposite the museum is often far less crowded than the main entrance. From here the paths snake uphill through the site beginning with the Theater of Dionysius and Theater of Herod Atticus. This is where the dramas of Aeschylus, Sophocles, and Euripides would have been performed.

You'll catch views of the sprawling city below as you climb the marble steps to the Propylaia Gates and the iconic Parthenon, the zenith of classical architecture, atop the sacred rock. Time it right, and the stone columns and six caryatids of the Erechtheion (they're replicas, as the originals, now in the museum, were eroded by air pollution) will now be gilded by the setting sun. By 7:30 pm the guards will start shooing you out. Savor the experience and the view of Athens at sunset before the gates close at 8 pm to signal the end of a perfect day.