The latest data from ForwardKeys reveals that the Russian invasion of Ukraine prompted an instant spike in flight cancellations to and from Russia.

On 25th February, the day after the start of the invasion, every booking that was made for travel to Russia was outweighed by six cancellations of pre-existing bookings. The source markets exhibiting the highest cancellation rates, in order of volume, were Germany 773%, France 472%, Italy 152%, the UK 254%, India 285% and Turkey 116%. 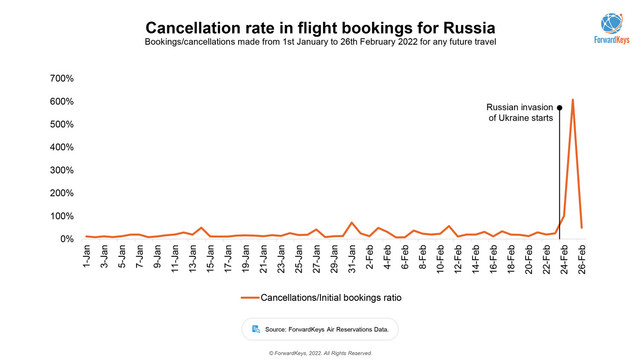 Prior to the outbreak of war, Russian outbound flight bookings for March, April and May, had recovered to 32% of pre-pandemic levels, with some holiday hotspots doing exceptionally well.

Mexico had been leading the way with flight bookings 427% ahead of 2019 levels. It was followed by Seychelles 279% ahead, Egypt 192% ahead and the Maldives 115% ahead. The outlook for travel during the summer months, July and August, was significantly stronger, as flight bookings stood at 46% of 2019 levels with destinations like the Maldives 78% ahead, Seychelles 275% ahead and Egypt 216% ahead.

For some of the countries mentioned above, such as the Seychelles, Maldives and Cyprus, Russian arrivals represent a high percentage of all international arrivals; so, a collapse in Russian travel will have damaging consequences on their tourism-dependent economies. The countries that currently stand to suffer the worst include Armenia, which depends on Russia for 47% of all visitors, Azerbaijan 44%, Uzbekistan 34%, Bulgaria 18%, the Seychelles 16%, the Maldives 15% and Cyprus 13%. 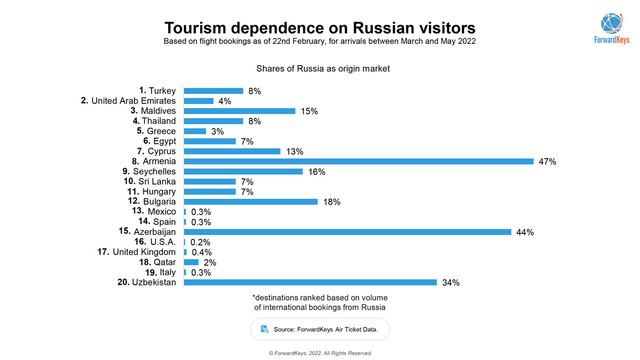 Destinations To Suffer Due To Loss Of Russian Visitors

Before the outbreak of war, the top twenty destinations most booked by Russian travellers in March, April and May were, in order of total bookings, Turkey, the UAE, the Maldives, Thailand, Greece, Egypt, Cyprus, Armenia, Seychelles, Sri Lanka, Hungary, Bulgaria, Mexico, Spain, Azerbaijan, USA, UK, Qatar, Italy and Uzbekistan.

Coinciding with the collapse in international air travel, a strong recovery in domestic air travel, immediately stalled. Up to 23rd February, Russian domestic flight bookings for March, April and May were running 25% ahead of pre-pandemic levels. However, new bookings have dropped by 77%, analysed on a week-on-week basis.

Olivier Ponti, VP Insights, ForwardKeys, said: “The outbreak of war always has a hugely damaging impact on the travel industry; and that is what we are seeing here, with mass cancellations in flight bookings to and from Russia. The Russian tourism economy was beginning to revive from the pandemic, and it will now experience another substantial blow. There will also be serious impacts on destinations that depend heavily on Russian visitors. The current data does not yet contain the impact of sanctions, which is bound to make the picture worse. Of course, should there be a cease-fire and successful peace talks, the outlook for travel should improve. However, while the economic damage already looks set to be dreadful; it is nothing compared to the human suffering experienced by the people on the field.”