It'll be available in Echo devices at home and in Walt Disney World Resort hotel rooms.

Amazon and Disney have just announced a new voice assistant called "Hey, Disney!" Built on Amazon's Alexa technology, this new Disney assistant will be available on your home Echo as well as in Echo devices located in Walt Disney World Resort hotel rooms. You can use it to interact with characters from Disney, Pixar, Marvel, Star Wars and more. It is the first time a custom Alexa assistant will be available on Echo devices.

According to Amazon, this voice assistant will give you access to interactive storytelling experiences and entertainment featuring Disney characters. You can also play games anD access jokes set in the Disney world. You can say "Hey, Disney!" to set timers and alarms, or check the weather. 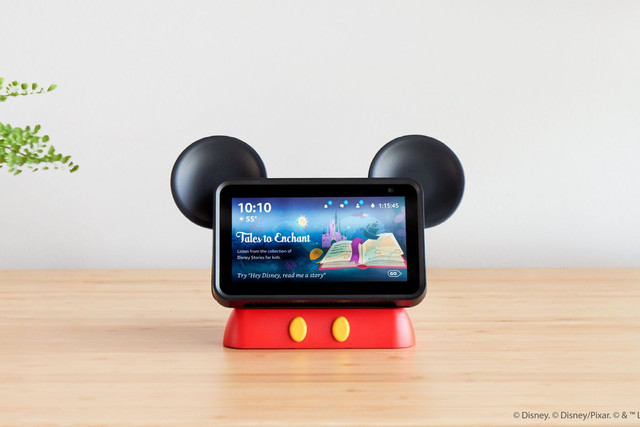 In Disney's hotel rooms, the voice assistant can be used to make your stay more pleasant. It can answer questions, fulfill special requests (like if you want more towels for example) and more. It's part of a new Alexa for Hospitality program that allows hotels to deploy Amazon Echo products at scale and feature customized screens as well.

The "Hey, Disney!" assistant will be available in the Alexa Skills Store in the US starting in 2022. At the same time, Amazon also introduced a new Disney edition of OtterBox Den Series stand for the Echo Show 5 that has Mickey ears. It's available for pre-order for $24.99.