By 2024, passengers will be able to book four-hour sessions in flat sleeping pods on ultra-long-haul routes

Air New Zealand will soon allow economy passengers to lie down and take a nap in communal, bunk bed-style sleeping pods on its planes, as it attempts to entice passengers on to its more than 17-hour ultra-long-haul flights.

In what the airline says will be a world first when its new cabins are installed by 2024, premium and regular economy passengers will still be sold traditional seats that do not recline into a bed.

However, these passengers will be able to book four-hour sessions in lie-flat sleeping pods – which the airline has named “Skynest” – at an additional cost.

Pods will have a mattress and sheets – which will be changed by cabin crew after each booking – and will be stacked on top of each other to take advantage of the height of the cabin.

Each pod will have a privacy curtain, USB charging and “ventilation outlets”.

Five economy seats will be removed to make space to install six of the Skynest pods across eight Boeing 787-9 Dreamliners that Air New Zealand will receive from the end of 2024. 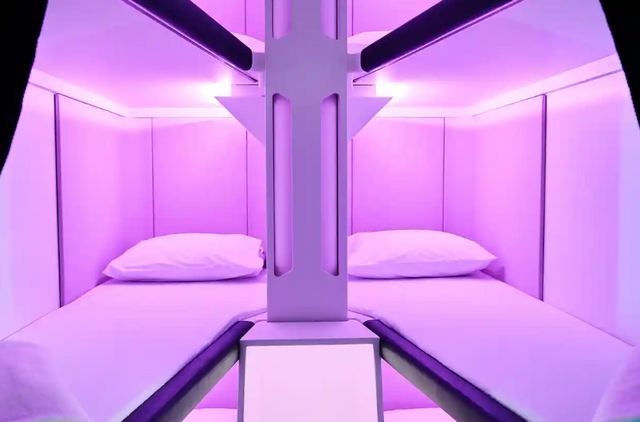 The sleeping pods will not be available for the launch of Air New Zealand’s direct flights between Auckland and New York this September – a route that is set to exceed 17 hours. The airline will also resume its Auckland to Chicago service in October.

An Air New Zealand spokeswoman told the Guardian that while the booking cost for a four-hour session in one of the beds has not yet been determined, it will only be open to regular and premium economy passengers.

Passengers will only be able to book one session in a pod per flight, as demand from the more than 200 seats across the economy cabin is expected to be strong.

The spokeswoman said the sleeping pods will be limited to one person at a time. The airline is developing a booking system for the pods.

“New Zealand’s location puts us in a unique position to lead on the ultra-long-haul travel experience. We have zeroed in on sleep, comfort and wellness because we know how important it is for our customers to arrive well-rested,” Foran said. “Whether they are heading straight into a meeting, or to their first holiday hotspot – they want to hit the ground running.”

Leanne Geraghty, the airline’s chief customer and sales officer, said: “Research shows us the first night away from home is the hardest to get a good night’s sleep so everything we do onboard is to help create a sense of calm – from the lighting and sleep ritual including sleepy teas and balms, to the healthier food choices and breathable fabrics.”

Air New Zealand’s plans for the sleeping pods come amid a spate of recent developments in the push toward ultra-long-haul flights between the region and the east coast of the United States and Europe.

In May, Australia’s Qantas unveiled further details of its long-anticipated plans to run non-stop flights from Sydney and Melbourne to London and New York. The so-called “Project Sunrise” flights, some of which will run 20 hours, will begin flying at the end of 2025. For its ultra-long-haul flights, Qantas has announced “wellbeing zones” for economy passengers to move about and stretch.

The airline first announced plans for beds for economy passengers in 2020, and already offers Skycouch, where a family or passengers who have booked out a row of seats in economy, or have spare seats next to them, can request special footrests that turn the row into a makeshift bed.