The caramel hair was as perfect as remembered. The rhythmic moves were as graceful as they are in our mind’s eye. And when those signature melismas of “I Will Always Love You” began, it was impossible not to be transported to the spot again — that spot, the plane of transcendent Zen only a handful of singers have ever taken us.

Whitney Houston was back. It's just that she was a hologram.

The Grammy-winning legend died more than nine years ago. But beginning this week in Las Vegas, Houston took the stage with a complement of breathing performers, shimmying and shimmering — and of course singing some of the most famous pop songs of all time in “An Evening With Whitney,” a live concert with a Houston hologram.

This is what Pat Houston, her sister-in-law and manager, wants; this is what a company known as BASE Hologram, run by the former Clear Channel executive Brian Becker, wants. Soon enough, we will find out if this is what America wants — whether we crave Houston in colorful regalia on a buzzing stage, delighting audiences as she did so often when she was alive, ascending us to new heights of afterlife performance, or, maybe, just plummeting us straight into the uncanny valley.

The show in many ways shatters the norms of techno-illusion. A two-minute deep fake is one thing. The dead dancing for us is another.

“I don’t see it as resurrecting the dead but as celebrating a life,” said Becker last week, pushing back, a little. “We want to build a great live show around her.”

The “live show” is made up of a four-piece band and four dancers. “Her” is a computer-generated face of the singer in her prime that has been digitally grafted to an actress body-double, choreographed and shot months ago and now projected onto a scrim. Nothing on performance night can go wrong.

Barring a power outage, at least.

What has been carved out with “Whitney” is more than a show: It’s a glimpse of a future, one in which departed performers live on, not just in shaky YouTube footage but in full-splendored presence. In a sense, the Houston hologram represents nothing less than technology’s ability to transcend time and sideline mortality, if only for 80 minutes while bopping along to “I Wanna Dance With Somebody” on the Vegas Strip.

Fatima Robinson, the prolific director and choreographer, is behind the show, but it is Houston’s specter that floats over it. The singer, with sales of more than 200 million records, works her way through all the hits people bought those records for, “How Will I Know” and “The Greatest Love of All,” “I Wanna Dance With Somebody” and “I Will Always Love You,” from the stage of the 550-seat Harrah’s Showroom. 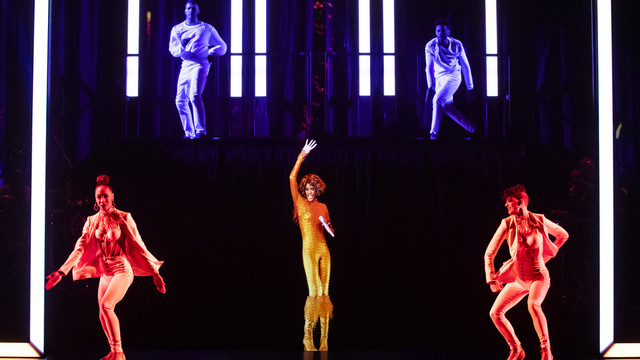 Several performances were held in the United Kingdom in early 2020, before lockdowns did to the star what death could not. The pause gave BASE and the team time to regroup, and now they are back with an open-ended, $80-a-pop run in Sin City.

If all goes well, a tour will follow in 2023, delivering hologram Whitney across the country. Yet Vegas is its most natural venue, an ethereal city playing host to a singer who is not actually there. (The Washington Post has viewed footage of multiple performances.)

Keith Harris, the Grammy-winning producer who is the show’s musical director, says the aim is the flow of a live show, though lifting the vocals from concert footage and lining them up with a hologram’s mouth movements wasn’t easy. Then again, if any of the vocals did wind up looking lip-synced, he points out, “what are they going to say, she’s not really singing?”

From the shuffling opening notes of “Higher Love” to the final sultry bars of “I’m Every Woman,” the show is a full-on Houston performance. Hologram implies a column of dust-filled light, but that would be an undersell. The singer walks around the stage, she salutes the band and crowd, she slinks and dances, all in a dynamic, human-seeming performance. She speaks, a little: “I’d like to do some songs for you tonight. Is that okay?" Oh, and there are wardrobe changes.

If one wants to drop down into a deep well of pop-philosophy, it is worth visiting the YouTube clip of an England show, where a commenting chorus calls it “creepy” and “demonic” and respondents offer defenses like “How is this demonic? It’s just a projection, they didn’t conjure up her spirit or anything.”

The show’s creative director, Mark Swanhart, has his own adjudication of the debate. “We’re not pretending she’s here. But I believe her spirit, her essence, is here."

Holograms are not new in pop music. Nine years ago, at Coachella, Tupac appeared, via an old trick known as “Pepper’s Ghost.” (Technically, it’s an optical illusion.) They popped up again last year after Kanye West gave Kim Kardashian the holographic gift of her late father.

They’re also not new to BASE, which has had hologram tours with Buddy Holly, Roy Orbison and Maria Callas. But those were different, lacking the production pizazz of the Houston show, and the recency. Where those performers go back many decades, Houston sold out arenas this century, and her overdose death in a room at the Beverly Hilton that tragic Grammys weekend in February 2012 is still a fresh wound.

Some see exploitation in conjuring dead performers by hologram — “ghost slavery,” the journalist Simon Reynolds has termed it — either by damaging their supernal essence or by simply forcing technology to stand them up again and again on stages they never intended to grace. In America, you cannot defame the dead. But you can overwork them seven shows a week in a Vegas club.

Pat Houston objects. She sees the production as a dream realized — a chance for a person to do in the virtual afterlife what they could not do while here on Earth. 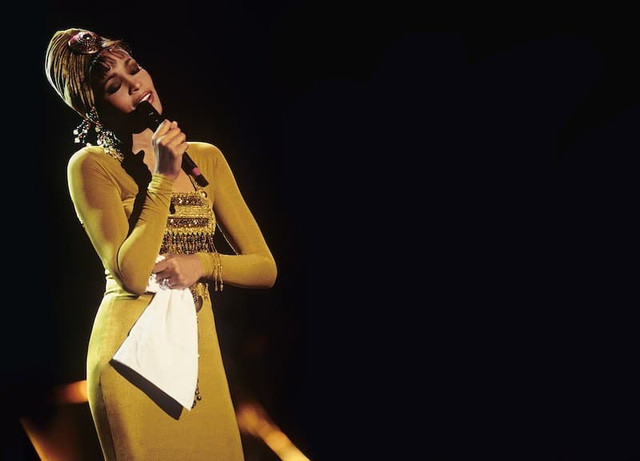 “Whitney would have loved the size of the venues and the ability to be in a smaller, more intimate setting,” Pat Houston wrote in an email. “Whitney’s touring was of course so massive when she was alive that she was playing arenas and stadiums and Super Bowls. But we often discussed the smaller venues and the ability to connect with an audience. She grew up singing in the church, so the connection to an audience was so important to her. She would have loved this show for its ability to be intimate with an audience.”

Becker points out that it would be hard to call it exploitation when the estate is involved creatively and sharing in the profits.

Reynolds also sees a kind of disruption to the music ecosystem in the form, since instead of new artists rising when old ones die, the old ones never clear out.

The show offers a chance for people who never saw Houston in concert to do so. But their language is not yet developed. When the image pauses before a song, claps cheer her on.

“It’s weird — like, you can’t encourage a hologram,”Becker said. (If the Whitney tour works, he has plans for other icon shows; he also envisions living artists appearing by hologram in multiple cities on the same night.)

There is a present advantage to a hologram star — they can’t get covid. Lockdowns in fact brought a burst of video game concerts in the likes of “Fortnite” and “Roblox.” This, in a way, is the inverse — not a real-life performer in a synthetic environment but a fabricated performer in a real one. It also runs alongside Mark Zuckerberg’s metaverse; both join the tangible and the digital.

The social-media backlash has been noisy. Becker theorizes it is the boldness of the experiment, but something more primal may be at work: Seeing a late icon vital reminds us of the thin line between life and death. To contemplate the Whitney Houston hologram is to feel instantly better about life — how nice to be reminded of all we once loved — while also coming face-to-face with the uncomfortable truth at its center: It all goes away.

Harris’s experience is that the crowd softens as the show moves on. “They’re very quiet at the beginning, like, ‘how are we supposed to react to this?’ And then a few songs in they’re clapping and getting into it,” he said. “By the guitar solos, they’re cheers-ing and crying.”

This, of course, is the goal. Watching Houston, we are meant to slip, if only momentarily, into the ecstasy of her presence, her talent, her alive-ness.

But will enough people be willing to indulge the illusion and attend the show? Would you?

“It’s really about allowing all of your senses to take over for a full experience. The music with a live band, the costumes and dancers, the feeling of being at a show,” Pat Houston says. “You can easily be swept up into it.” There can be miracles, when you believe.