The largest of the Greek islands, Crete is an essential stop on any cruise of the Eastern Med.  This history-steeped isle has plenty to see, including bustling cities, gorgeous natural scenery, ancient archaeological sites – and, of course, pristine beaches.

Port city and capital Heraklion is an enticing first stop on any exploration of the island, and it’s filled with ancient relics and Venetian architecture. The Venetian Koulles fortress, or Rocca a Mare, sits at the entrance to the port, and the city’s Archaeological Museum is home to a vast collection of Minoan artefacts.

Just to the south of Heraklion is the red-columned Palace of Knossos, a huge Bronze Age site made famous by the legendary King Minos and his son, the mythical Minotaur. The ruins include hundreds of rooms and huge, colourful frescoes. Nearby Phaistos is another important Minoan site not to be missed.

While you’re in Heraklion, you can also enjoy mouthwatering Cretan cuisine at any number of tempting tavernas. Cosy Peskesi is a hidden gem serving world-class food including grilled prawns, pork steaks and strawberry cheesecake.

Crete is a haven for nature lovers. The spectacular Richtis gorge near Sitia on the east of the island is an ideal choice for a hike, starting at Lachanas Bridge and ending at Richtis Beach. Inhale the fragrance of wildflowers and enjoy the many natural sights en route, including a breathtaking 20m-high waterfall. Once you reach rocky Richtis beach you’ll have earnt a dip in the crystal clear waters.

As with any Greek island, much of Crete’s appeal lies in its beach-encrusted coastline. When you’re longing to sink your toes into golden sand, seek out Elafonisi in the south-west. Its ice-clear waters lap up against the sands, which are tinged with pink shells. This tucked-away spot is a rare quiet beach in Crete, but it gets busier with locals on weekends. 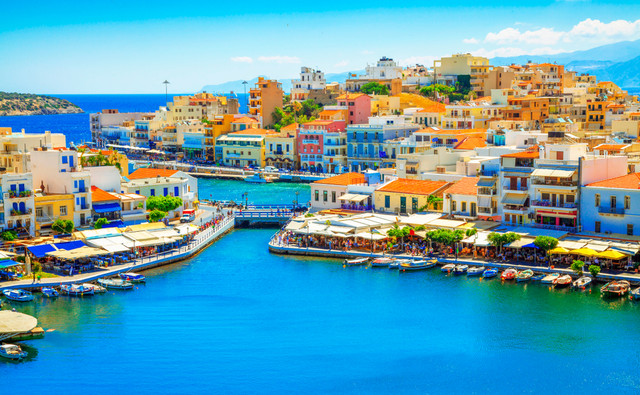 The eastern Dodecanese isle of Patmos is a tiny gem, full of history, beauty and authentic Greek character. You’ll arrive at Skala, the island’s port at the centre of the eastern coast. Try one of the town’s original tavernas for traditional meat stews and fresh seafood served at streetside tables, often to a backdrop of live music.

To experience Patmos’s gorgeous coastline in full, take a boat trip from Skala to the beach of Psili Ammos (meaning ‘fine sand’). This lovely spot is home to soft golden sand dunes and shady Tamarisk trees. Treat yourself to a dip and enjoy lunch or a coffee at the café on the beach.

A few kilometres south of Skala is the island’s capital Chora, home to the Monastery of St John the Theologian, a hilltop Byzantine site with stunning views over the glittering blue sea. The cave below is where St John is said to have written the Book of Revelations, and it’s now enclosed in an 11th-century chapel and open for tours.

Chora is also a lovely spot for dining, drinking and watching the world go by, with plenty of cool tavernas and terrace cafés to enjoy a cool beer or a revivifying coffee. Try family restaurant Pantheon near the monastery for delicious traditional courgette fritters and fava beans.

You’ll find another lovely, if rocky, beach at Petra, where calm water tempts swimmers and snorkelers. You can hire sun loungers on the organised section of the beach or stick to each end, which are free for anyone to enjoy.

Patmos is small, and many of its sites are within walking or boating distance of each other. Taxis are a convenient option if you need to venture further afield – or you could rent a moped for a whistlestop tour with the wind in your hair. 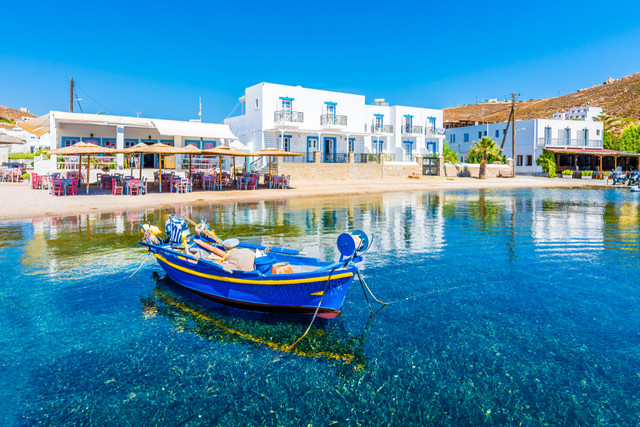 Pronounced Ro-dos, the largest island in the Dodecanese is also one of the most historically important, home to ancient mosques, palaces and even its own acropolis.

You’ll arrive at its medieval capital, also called Rhodes, via the lovely Mandraki Harbour, which is guarded by a 15th-century fortress, Agios Nikolaos. From here it’s a short stroll to the Old Town and the magical Palace of the Grand Master.

From noon daily you can walk the 4km-long walls of the Old Town, starting and finishing at the palace. This unforgettable experience is one of the best ways to see the town and the wider island, as well as the sweep of sea to Turkey beyond.

Outside the walls you’ll find the lower town, which is packed with Ottoman architecture including hammams, Byzantine chapels and the Mosque of Suleyman the Magnificent.

If you’re feeling weary after all that sightseeing, take a well-earned rest with lunch at Avocado – it’s a must-visit for its shrimp salad and seafood linguine. And enjoy traditional local hospitality – plus coffee and irresistible baklava – at Mevlana shisha bar.

About 40km south of Rhodes Town is Lindos, home to the island’s spectacular acropolis. It’s a short but steep hike up to the summit, where you’ll find 4th-century BC sanctuary of Athena Lindia, a temple and arcade, plus a large ancient theatre. All of this is set against the staggering sweep of the Mediterranean.

Lindos town itself continues the historical theme, with traditional white villas, narrow cobbled streets and pretty ancient squares. Pause to enjoy an Ouzo and some grilled octopus at a terrace on the town square.

No Greek island experience would be complete without some sun, sea and relaxation on a sandy beach, and Rhodes has gorgeous shoreline in abundance. The beach at Lindos is one of the best on the island – a broad sweep of soft, honey-coloured sand with magical views of the town and the acropolis.

And if you’re looking for after-hours entertainment, you’d be remiss not to visit Faliraki. This famous party town has calmed down since its heyday a decade or so ago, but it’s still home to an array of bustling bars and live music venues, including Bondi Bar, which plays host to DJs every night. The town’s Anthony Quinn Bay is an idyllic spot for a dip in tempting turquoise waters the morning after the night before. 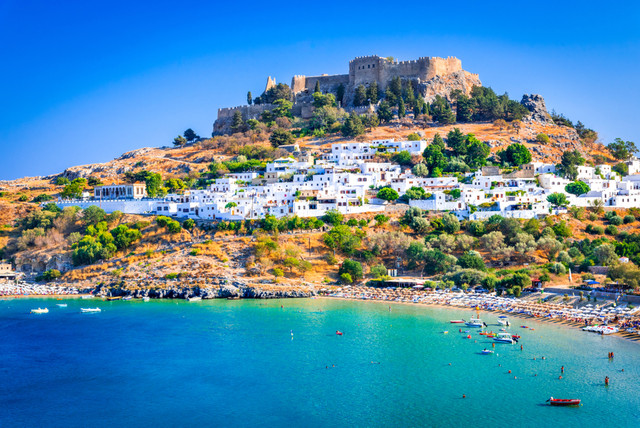