The sister park to the original Disneyland, Disney California Adventure opened in 2001 as a celebration of the Golden State. While it still retains some California-centric nods (especially the lovely, retro Buena Vista Street just inside the front gate), it has morphed into a more eclectic collection of lands and attractions that draw on many of Disney’s brands. When it expanded in 2012 and added Cars Land, Disney California Adventure especially embraced the Pixar films, characters, and stories while the 2021 opening of Avengers Campus brought the Marvel universe to the park.


Part of the Disneyland Resort, which also includes Disneyland Park, the Downtown Disney dining, shopping, and entertainment complex, and three on-property hotels, there is much to consider when visiting Mickey and the gang. Which rides and attractions should you experience? What eateries should you check out? Where should you stay? Let’s get to it. 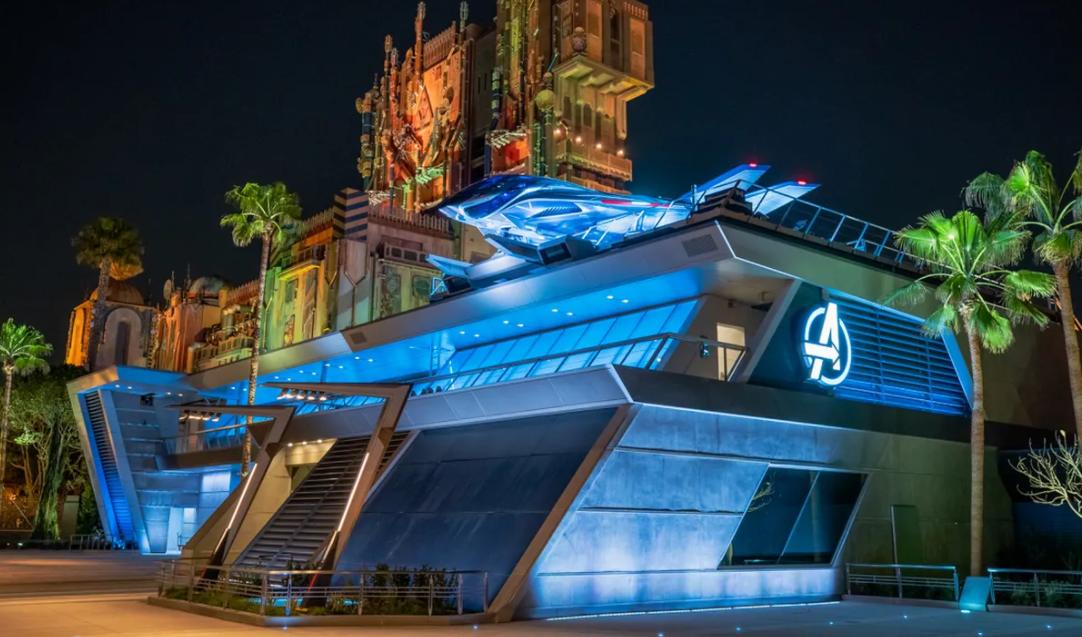 Best Time to Visit: Because so many California locals visit the park, weekdays generally attract fewer visitors than on weekends. The time of year with the least amount of guests (and the lowest ticket and hotel prices) is mid-January to mid-March. It’ll be a bit busier, but still relatively quiet, in September through early November, and mid-April to mid-May.

The peak season coincides with summer school vacations, from late June to early August, as well as Thanksgiving, Easter, and the week between Christmas and New Year’s Day. While the crowds will be greater and the wait times for rides will be longer during the busier times of the year, the park will be open longer and offer more nighttime shows and other presentations.

Sunny California is relatively temperate year-round. Although it is rare (but getting less so), it can be brutally hot in the summer. It can get a bit nippy in December through February, especially at night. Perhaps the best time to visit Disney California Adventure, in terms of weather, is March, April, or May when springtime conditions are typically ideal.

Note that regardless when you plan to visit the parks, you will likely need to make a park reservation in advance. Disneyland introduced the reservation requirement when it reopened after the pandemic in 2021. It appears that the requirement will become permanent.

Getting Around: The compact Disneyland Resort is quite easy to navigate. Unless you plan to explore Southern California, there is no need to have a car. Disney California Adventure is just across the plaza from Disneyland Park and adjacent to Downtown Disney. Disney’s Grand Californian Hotel overlooks Disney California Adventure, and hotel guests have their own dedicated entrance into the park. While it is a pleasant walk, visitors should ride in style at least once aboard the historic Disneyland Monorail that travels between Tomorrowland at Disneyland Park and the far end of Downtown Disney near the Disneyland Hotel.

Travel Tip: Guests staying at one of Disney’s three on-property hotels used to be able to access the parks before the general public during the resort’s “Extra Magic Hours” program. Disneyland suspended the program during the pandemic. Before making reservations, check to see whether it has reinstated the benefit.

In fall 2021, the Disneyland Resort replaced its Fastpass and MaxPass ride reservation and line-skipping programs with Disney Genie, Disney Genie+, and Lightning Lane Select. Learn how the digital park planning services work and how they can you help you better enjoy your Disney California Adventure visit.

Among the most popular attractions at Disney California Adventure is Radiator Springs Racers, the tour-de-force E-Ticket ride in Cars Land. It is set amid the spectacular Cadillac Mountain range and Ornament Valley at the end of Route 66 in the meticulously themed area. Try to time your visit to Cars Land at dusk so that you can witness the glorious neon lights that illuminate Radiator Springs as the doo-wop song “Sh-Boom (Life Could Be a Dream)” plays in the background–just like in the original “Cars” movie. For high-speed thrills, head over to Pixar Pier and take a ride on the launched, looping thrill machine, Incredicoaster. There are thrills (and laughs) aplenty also at Guardians of the Galaxy – Mission: BREAKOUT!, the faster-than-freefall attraction that was previously known as The Twilight Zone Tower of Terror.

There are plenty of other highlights throughout the park, including the world’s first flying theater ride, Soarin’ Around the World; the interactive, video game-like Toy Story Midway Mania; and the wacky superhero training experience, WEB SLINGERS: A Spider-Man Adventure.

Filled with stirring scenes projected onto water screens, magnificent dancing fountains, lasers, pyrotechnics, and more, World of Color is one of the best nighttime spectaculars at any Disney park.

What To Eat and Drink

There are plenty of wonderful places to eat, drink, and be Mickey at Disney California Adventure, starting with the Carthay Circle Restaurant. The elegant spot may just offer the best fine dining experience at any U.S. theme park. The Carthay Circle Lounge on the ground floor offers a wide variety of mixed drinks and small plate dishes for sharing. Another great table-service spot is Lamplight Lounge. Featuring an eclectic menu, its whimsical dining room celebrates the artists who create Pixar films.

For quick-service refueling, head over to Flo's V8 Cafe where punny items such as the Ka-Cheeseburger and the Cobb de Ville Salad are on the menu. For quirky fare, consider the Pym Test Kitchen at Avengers Campus. It has ridiculously oversized and undersized dishes such as the Not So Little Chicken Sandwich, which is a humongous chicken breast served on a tiny bun. 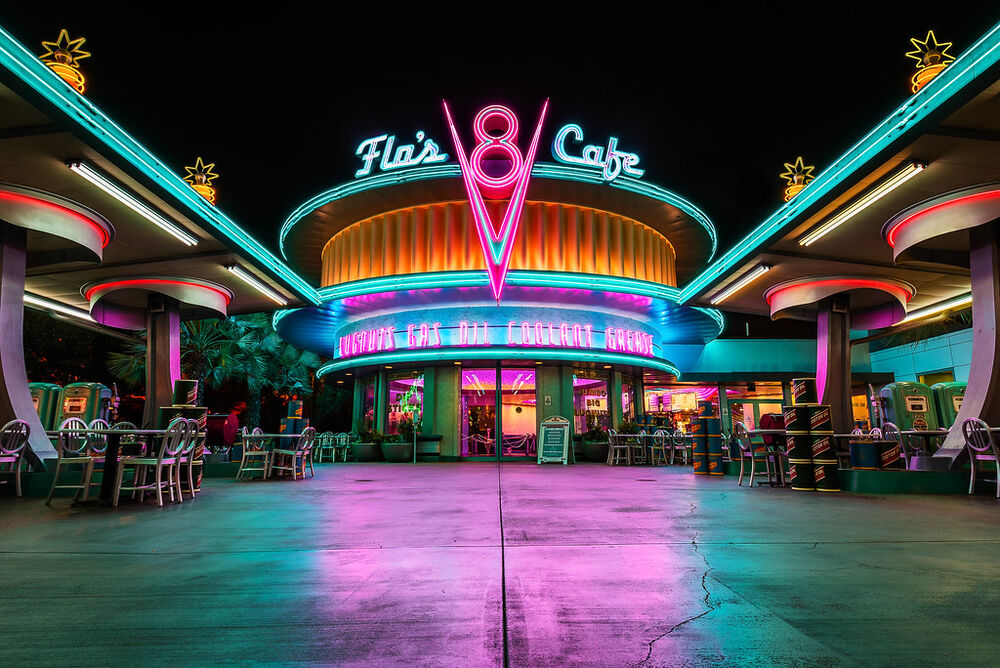 Because the resort is so compact, you could easily leave the park and head across the plaza for a meal at Disneyland (if your ticket allows you to visit more than one park in a day). Among our favorite restaurants in the park is Blue Bayou where you can savor cajun fare as the Pirates of the Caribbean boats float past. Or you could grab a Ronto Wrap at Ronto Roasters in Star Wars: Galaxy's Edge.

You wouldn't need a two-park ticket to duck out for a meal at Downtown Disney or the resort’s hotels. Good choices there include Napa Rose at Disney’s Grand Californian Hotel, which specializes in locally sourced, seasonal fare, and Catal Restaurant at Downtown Disney, which serves Mediterranean dishes. 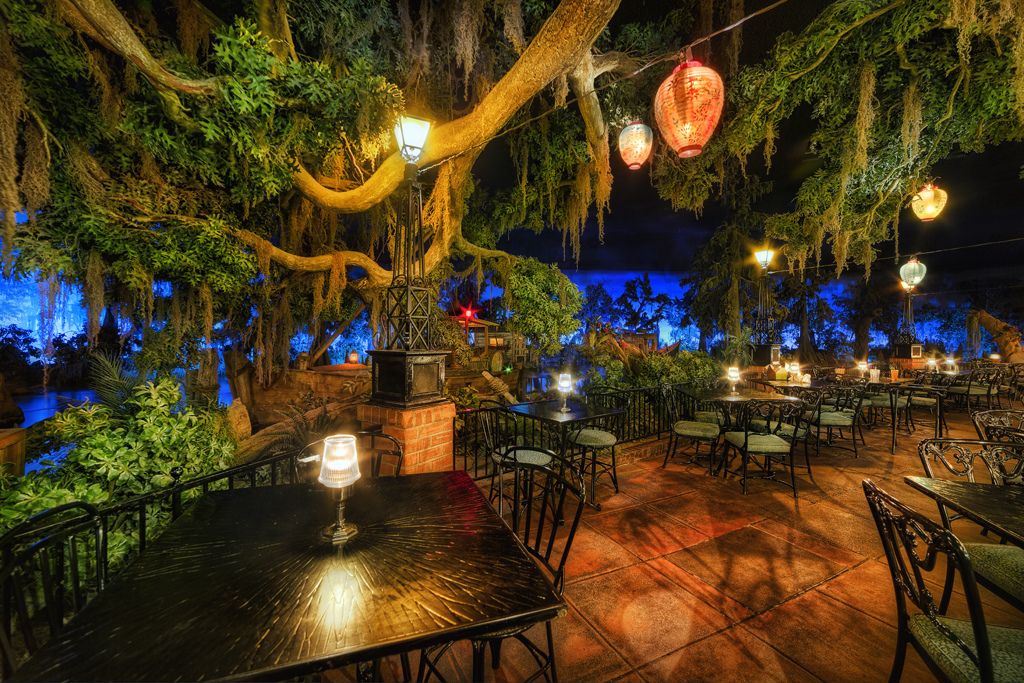 Because the full-service restaurants are so popular, advance reservations are all but required. We have compiled all the ways you can make reservations, including online, by phone, and in person. For quick-service restaurants, consider using the resort’s mobile food and beverage ordering service. Your meals will be ready when you arrive at the counter. There are no character dining experiences at Disney California Adventure. But you can break bread with Goofy and others elsewhere in the resort.

You could stay off property and save money at one of the many lodging options in the area. But the resort’s three hotels, especially the Grand Californian and the historic Disneyland Hotel, would allow you to revel in the Disney ambiance 24/7.

While it has been expanded and modernized, the Disneyland Hotel nonetheless maintains a delightfully retro charm. The monorail-themed water slide topped by a replica of Disneyland’s original entrance sign characterizes the hotel’s vintage allure. The Grand Californian, with its towering lobby evocative of a rustic lodge and Arts and Crafts-inspired architecture, offers an elegant alternative. Its full-service spa could help soothe and revitalize you after a long day at the park. The Paradise Pier hotel, which Disney acquired from a third-party operator, is the most pedestrian and affordable of the three properties.

If you're flying into LAX, you can get to Disneyland and California Adventure via public transit, shuttle services, ride-hailing services, and rental car.